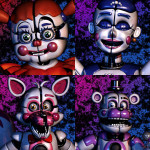 The survival aspect of prior games has been removed from the bulk of the action in Five Nights at Freddy's: Sister Location, which is rather refreshing. Rather of staying in a fixed location and dodging the animatronic adversaries' attacks, the player must go from room to room in order to complete a variety of narrative objectives, which vary over each of the five nights of the game's campaign. If you compare Sister Location to the previous games, you'll see that it differs in some crucial gameplay and plot features. As an alternative, it provides the opportunity to navigate between rooms, each of which has a different goal that the player must complete. A new cast of animatronic characters is introduced to the player during the course of the game, with Circus Baby, a friendly mechanical creature, serving as the major character.