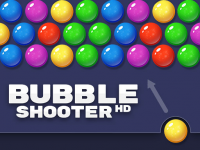 Enjoy the top free bubble shooter game online right now by playing Bubble Shooter! A famous arcade game called Bubble Shooter, which Taito Corporation produced in 1995, reached previously unheard-of heights of success in 2001 when it was released as the PC game Bubble Shooter as we know it today. Absolutist subsequently created and released the game.

Millions of people all around the globe enjoy playing games like "Bubble Shooter." It's easy to see why people are so enthralled by these entertaining bubble shooter games. To accumulate as many points as you can in Bubble Shooter. The colored bubbles must be destroyed in order to get points. You need at least three bubbles of the same color in a row or connected to bust those bubbles.

How To Play Bubble Shooter HD