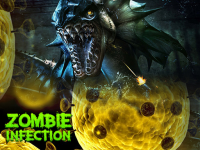 Zombie Infection is a top-down, side-scrolling action-adventure game. When shooting at an opponent with a weapon (save the laser gun), a yellow crosshair appears on the adversary, moving vertically (in the case of big spiders, horizontally from one set of their feet to the next) and constantly (except in the case of infected little spiders and clawed monsters). A shot to the head of a typical adversary kills it instantly.

If the player is near a crawling enemy, he or she may stomp on their heads. It is possible to select whether or not to gather, drop, or utilize objects, which may be kept in or removed from a box at "checkpoints," some of which also enable the user to manage the bags of playable characters who are not now under the player's control. If the box or bag is full, no further goods may be stored in it. Some things can be mixed and matched. At checkpoints, the player may also visit an in-game store. You can make a weapon better by getting or buying an upgrade for it and putting it together with the weapon. This makes the weapon's attack power, firepower, or clips better.

The current player character's inventory may be seen at any time (except during dialogue situations) by selecting the Items menu from the pause menu. The player's gathered documents and the biographies of four of the important characters may be seen by stopping the game and going to the Documents and Characters sub-menus in the Data menu. If the run-attack option is active, a special attack may be performed by hitting the button in the center of the D-pad or 5, touching the A button, or clicking the attack symbol while moving (if there is an enemy nearby). Some weapons and accessories are only available to one player character, such as machine guns and rocket launchers for Anderson Stark, katanas and shurikens for Mike Kingsley, and the Shotgun Pro and camera for Shawna Michaels.

When playing as Shawna, you may use the camera to film movies of adversaries, unusual occurrences, or graffiti and post them to the Internet in return for points that can be used to purchase products in the store. Killing foes will also give you points.

How To Play Zombie Infection